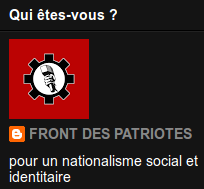 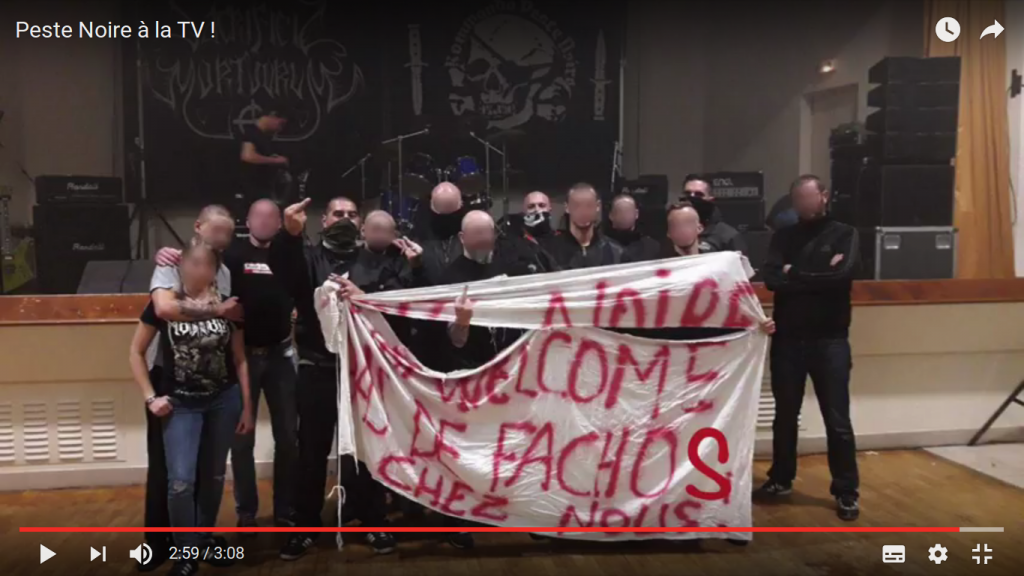 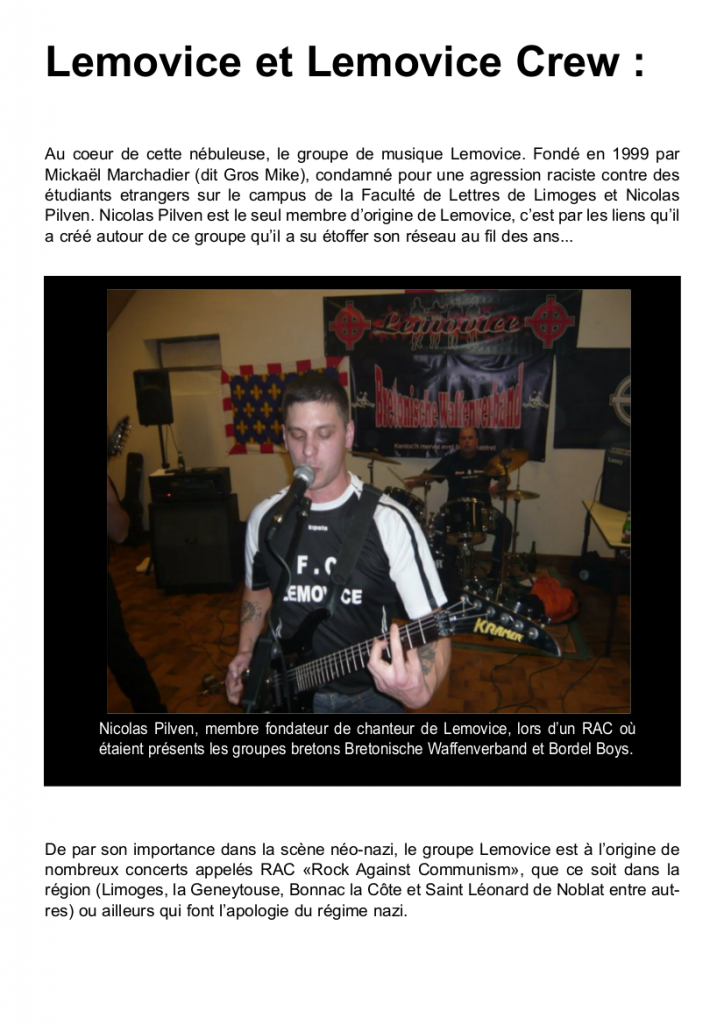 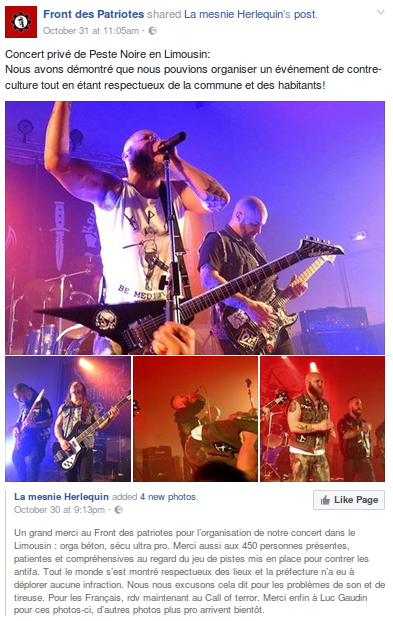 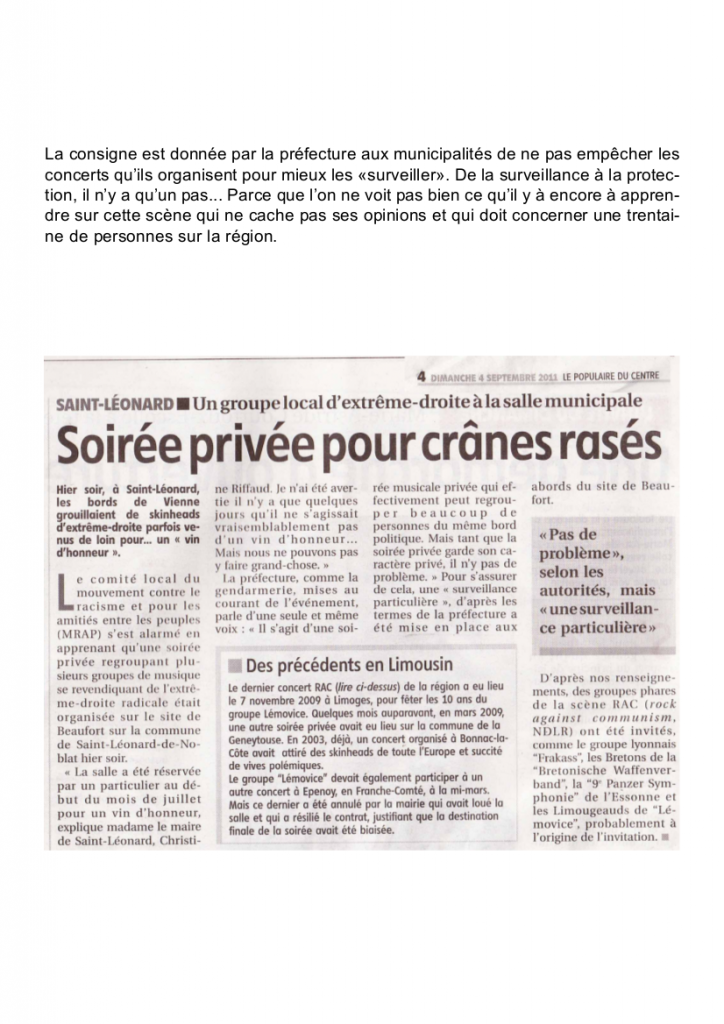 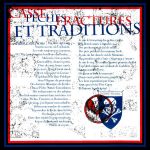 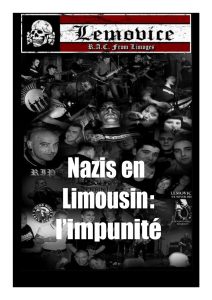 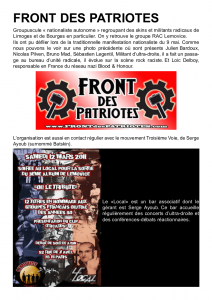 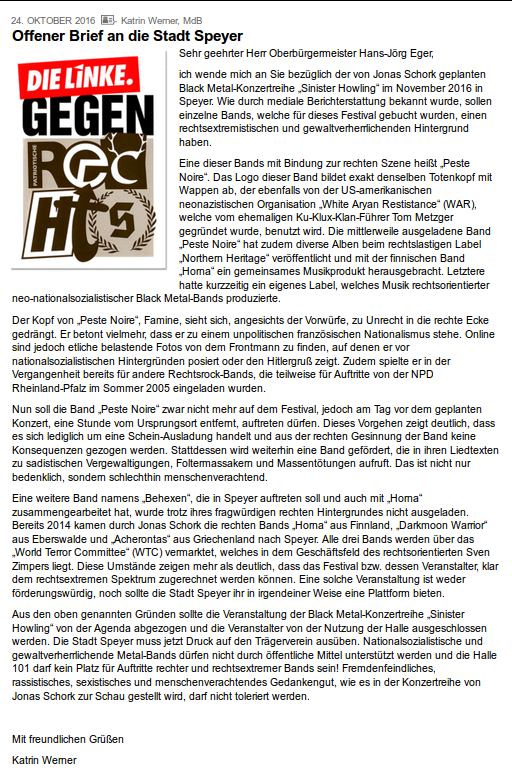 In recent years, the National Socialist Black Metal (NSBM) tends to invite as if nothing had happened in different metal festivals: if in Norway or Germany, the phenomenon is taken seriously, in France, where a NSBM group as Peste Noire may occur in the general indifference, it does not seem to take the measure of the danger of the neo-Nazi drift which many metal fans do not want.

If the black metal bands, a dark and sometimes melancholic derivative appeared from heavy metal in the 1980s, increasing satanic references, revel in describing all forms of extreme violence and often call in a large misanthropic impulse to the disappearance of the human species, it generally further to see a taste for provocation than a real will to end, despite some miscellaneous macabre (voluntary church fires, suicides, murders) accompanying the history of this movement. Some black metal bands even defend anti-racist ideas, anarchists, environmentalists or self-management, or even anti-fascist, as the Russian group Distress, in which played Timur Kachavara murdered by neo-Nazis in November 2005. However, there are also unfortunately in this scene, a subgenre, the movement National Socialist Black Metal (NSBM), which is more ideology-in- music and a meta-political project than musical delight. The National Socialist Black Metal is a somewhat restrictive designation to denote in fact any form of extreme metal used as vector to an extreme right ideology (neo-Nazism, völkish ideology, pagan, Slavic, nationalism, identity …).

Throughout the 1970s and 1980s, heavy metal was a rather apolitical musical movement, but from the 1990s some black metal bands (more aggressive version and “dark” of the genre) made themselves noticed by postures racist and nationalist policies, to impose on the whole metal scene worldview. Here are some figures that are most often related music production, about neo-Nazis and crime. Burzum, founded in 1991, is a one-man band of Norwegian Kristian Vikernes, nicknamed “Varg” (wolf in Norwegian), convicted in 1994 and sentenced to 21 years in prison for church destroyed by fire and the murder of Aarseth Oysten alias “Euronymous”, member of the famous black metal band Mayhem (including Vikernes was briefly). Vikernes continued his career by producing the record Burzum from his cell, writing books on paganism and creating the odaliste movement, while adopting a naziskin look.

In 2010, after serving his sentence, Vikernes moved to France in Corrèze, and converts the survivalism: in 2013, he was arrested by police, suspected of wanting to carry out an attack like Anders Breivik [1], and a search of his home found that he was in possession of half a dozen guns. But it is ultimately for anti-Semitic and racist remarks posted on his blog that he finds himself in the same year in court.

The day of his trial, in addition to fans of Burzum came to ask for an autograph and make selfies with him, a few dozen far-right activists (including Logan Djian, which we recently talked about here) accompanied him. It must be said that the same day, same place, Dieudonné was on trial for his anti-Semitic song “Shoahnanas” Vikernes will mail the same evening a support video, quenelle in support. Another link with the environment of extreme French right, Vikernes will release a book entitled Magic and Religion in Ancient Scandinavia Editions of Rubicon, a publishing house close to the radio show Zero Meridian, itself linked to the Movement of Social Action (MAS), a nationalist-revolutionary splinter group who recently voluntarily dissolved. The German Hendrik Möbus, initiated in the US in the white supremacist networks, is the manager of NSBM Darker than Black label, and the main organizer NSBM rallies in Germany, Eastern Europe and Italy. Möbus founded in 1992 the group NSBM Absurd, which became known by taking in one of his music videos of images of Nazi movie Der Ewige Jude. Furthermore, in April 1993, still a teenager, Möbus was premeditated and organized with other members of the group murder of their comrade Sandro Beyer, 15, they strangled with an electric cable. He was sentenced in 1994 to eight years in prison.

Polish Robert Fudali , alias Rob Darken, is also active since the early 1990s: man band within Graveland, founded in 1992, is also a member of the organization of musicians “Aryan” Temple of Fullmoon.

On the official website of Graveland, dozens of anti-Semitic are archived in interviews published over twenty years. In 2016 Graveland gave his first concerts at the Hot Shower in Italy as well as Ragnard Rockfest in France, in Ain, in July, the prefect, alerted to the presence of neo-Nazi groups, has nevertheless allowed the rally NSBM which was in the shape of a Viking festival, but in which the tributes to Burzum and Absurd were many on stage and NSBM propaganda was broadcast for four days with 12,000 spectators …

Beyond these founding figures, which remain references today, the recent development of NSBM scene is way more occult, adapting locally. The relative success of certain groups makes them more discretion, taking their distance with an openly neo-Nazi ideology in order to silence their critics, and by adopting a position that could be described, in the words of the researcher to Anton Shekhovtsov About neo-folk scenes and industrial 1990s of “apolitéïque”.

The Peste Noire Group is currently in the forefront of the hexagonal NSBM scene, invited to several festivals throughout Europe, even headlining, and provides at least two concerts “illegals” in France soon: the October 29 in Limousin, January 28, in Rhône-Alpes. PN also announced, despite the ban, occur on November 18 in southern Germany (in the region of Mannheim).

Since its appearance in 2001 with the demo entitled “Aryan Supremacy” (the band had already released in 2000 under another name, Dor Daedeloth), the group has nevertheless given in ten years than fifteen concerts in France and Canada, in particular due to unstable line-up.

Founded by a Ludovic aka “Famine”, a follower of the dumpling and the Nazi trinkets, Peste Noire is named for antisemitism of its leader, which here refers to the bubonic plague that decimated the population of Europe between 1347 and 1352 and gave rise to many anti-Jewish pogroms.

In the demo of 2001, Peste Noire also assumes its anti-Semitic hatred, with lyrics like the song “Death Camp”: “Before leaving this earth / I Want Their death / A pure fucking genocide / For the ultimate revenge “which can be translated as:” Before leaving this earth / I wish them dead / A fucking pure genocide / for the ultimate revenge “. Subsequently, no anti-Semitic about will also explicit in the lyrics of the group, but in the introduction to his eponymous album, Black Death takes a speech in background of the LVF July 8, 1941, which says: “This is not France who was beaten, this is not the french people, it is the band of Jews, capitalist bastards who ruled us. “. Despite this, Famine, which claims willingly “nationalist” is yet denies any affiliation with the German national socialism: it would, he said, rather seek references from the side of Ukrainian ultranationalist Stepan Bandera.

It has actively collaborated with the Nazis to fight the Red Army, and his commandos committed numerous anti-Semitic massacres, as in Lviv June 25, 1941, together with the Einsatzgruppen: but, despite all its brands goodwill, Hitler finally refused to Ukrainian nationalists their country to be anything more than a German colony, Stepan Bandera protests and he is incarcerated, while some of his fighters, after the dissolution of his troops, join the Nazis and participate in the Babi Yar massacre in September 1941. After encouraging Ukrainians to support the Nazis in the fight against Bolshevism, Bandera, in 1943, appeals to desert while continuing to defend the idea of an integral nationalism; mostly because he understands that Hitler will lose the war in December 1944, Bandera eventually flee Berlin … This brief history shows that the denials of famine on its neo-Nazi sympathies are simply grotesque,  especially since today is the idol Bandera Ukrainian ultranationalist right Sector and Asov regiment with whom Famine likes to stretch the right arm with his Swiss friends of Misanthropic Division. To return to the Peste Noire, the group was renamed Kommando Peste Noire (KPN) for his live performances, during which it hosts within itself from other training musicians.

KPN and includes the RAC group members (Rock Against Communism): there are three members of the group Wolfangel (more information on this group in the folder created by the Toulouse antifascists), which, on drums, Denis Florian by Moreover cemetery caretaker in Riom (it is not invented). Note some porosity in France between the RAC and scenes NSBM since RAC Lemovice group performs live with musicians playing in groups NSBM Limoges, like Marc Duparc, found both in Lemovice and Peste Noire.

Finally, Famine sharing the microphone with “Thorwald,” the group NSBM Baise ma Hache (BMH). If BMH has a more targeted public yet, the group nevertheless deserves attention because it now shows a certain vitality. In June 2015, BMH had to play in Saint Etienne, the Voute Key, an intercultural space yet, but thanks to the vigilance of the local anti-fascists, who, in support folder, had alerted the managers of the hall, concert was eventually canceled. BMH happened recently in the local Picard Serge Ayoub, and in September, he played in Italy, alongside Dark Fury, a leader of the Polish NSBM scene. Banned in Germany in black metal Sinister Howlig festival in November, the group has also been ruled out of the next Blast Fest scheduled for February 2017 Norway: Napalm Death group that participates in the festival, had protested against the presence of Black Death and the managers of the concert hall, managers of accommodation, officials kitchens and canteens artists, festival partners also warned that the coming of the Black Death tantamount to outright cancellation of the festival .

However, in terms of concerts planned in France, everything seems to run smoothly. The flyer calling for the planned rally on October 29 is yet politically explicit: it uses the logo of the White Aryan Resistance, and one of the groups, Sacrificia Mortum uses meanwhile the Celtic cross in its logo. Organized on the model of neo-Nazi concerts like those of Blood & Honour, the concert venue is being kept secret and will be revealed at the last moment: we simply know that the room would have a capacity of 500 seats, and the price entrance is 25 euros (there are no small profit!). January 28, 2017, KPN and BMH share the bill with the Polish band Dark Fury, already mentioned above, and the Finnish group Goatmoon, active since 2002, the leader likes to show off with a shirt representing the Nazi eagle; in his song “Der Zieg of Ziegenmondes” he bawls explicitly: “the swastika emerges from my homeland / time of purification is coming. “

Admittedly Peste Noire was able to develop strategies to circumvent the prohibitions, for example by changing the date of its meetings at the last moment. PN also like to adopt a posture of victimhood, denouncing the “plot” antifascist who persecute him, whining invoke “freedom of expression” can be provided that his reaction to our article, if there is one, will be the same ilk. Yet it is much more indifference that dominates in anti-racist and progressive structures (with the exception of a few antifa Toulouse, Limoges and Saint-Etienne) against a phenomenon that certainly remains marginal, but that is allowed to develop in peace, despite a neo-Nazi ideology clearly displayed and international dating unambiguous. 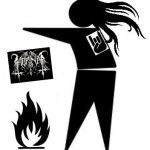 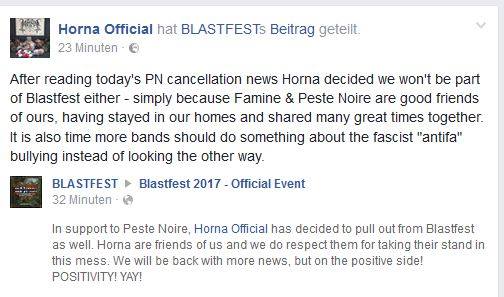 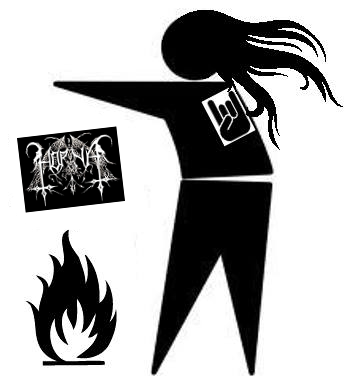 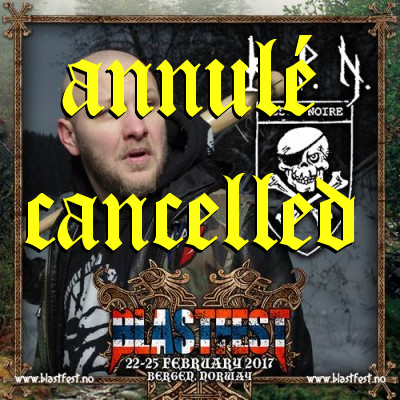 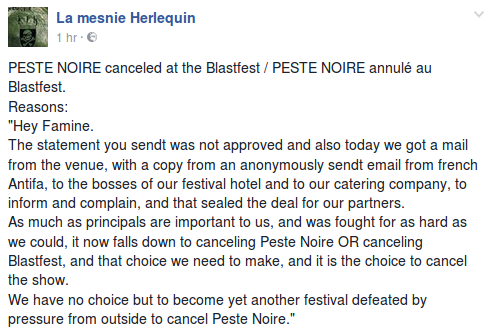 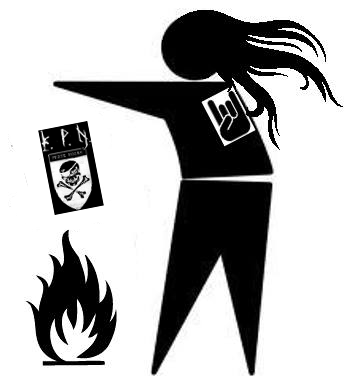 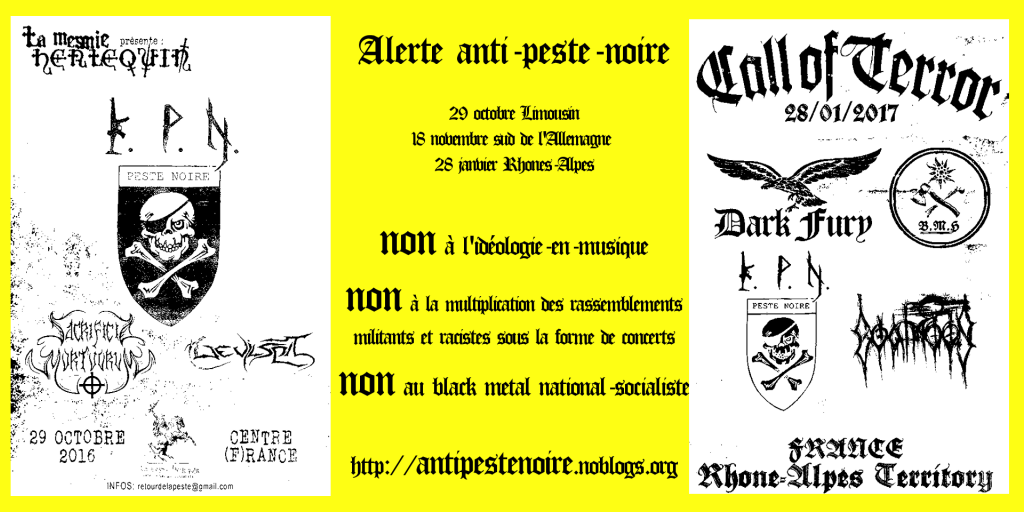